Signing out from Belgium

Time for my last post. What a fantastic last weekend in Belgium (and Luxembourg)! My Belgian racing career comes to an end for this season. It's kind of sad because I was really getting used to it and enjoying it a lot. I hope it won't be the last time I get to come over and race in Belgium. This weekend's race was in Varsenare about 65 km from here. The weather was clear and crisp just above freezing. The course was excellent with a mix of everything - a long straight away for the start on the pavement with some nice twisty, turny sections and ups/downs, fields, dismounts over a double barrier (for once!) and over a few ditches and a loose pebble pit instead of a sand pit with a tricky turn and small ascent at the end of it. The course was fast, probably the fastest of the five races I've done here so far. Vicki Thomas was out to cheer for Marc Boudreau from Ottawa (who just arrived 4 days earlier) and me. She's got the pictures on her camera (I hope to get them soon). This was probably my best race at least in terms of being closest to the front (on time). I was really hoping to beat the two guys who have finished consistently right before me in the past 4 races but unfortunately it didn't happen before I left Belgium. I suppose it means I have to return next year!
After the race, it was a quick drive home, time to get some lunch and then finish off the last 4 climbs of the Tour of Flanders (at least in the 2009 version) to finally have made it through all the main climbs of this incredible cobbled classic - the Valkenberg, Ten Bosse, Muur-Kapelmuur and Bosberg. 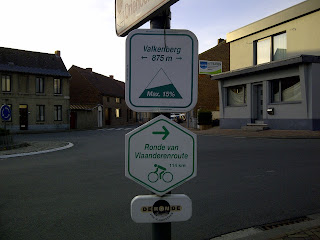 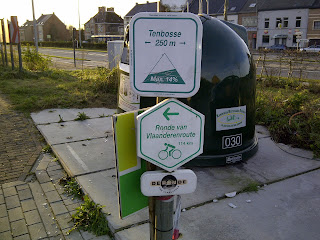 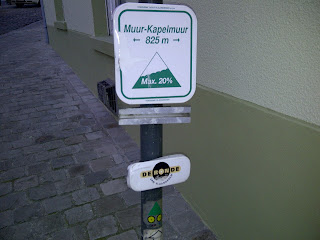 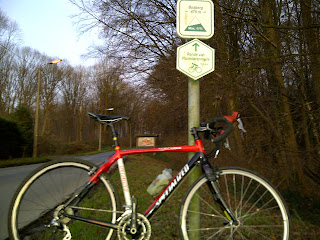 In between the 2nd and 3rd of these climbs there was this cool "bike monument" in the middle of a traffic island. 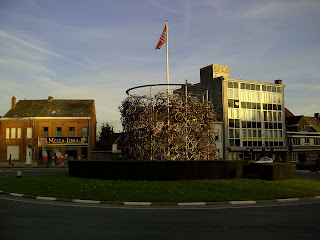 The Muur is in a town called Geraardsbergen. It's a neat place with the big church and square at the bottom of the climb. 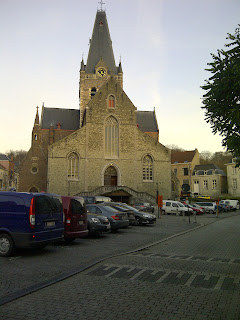 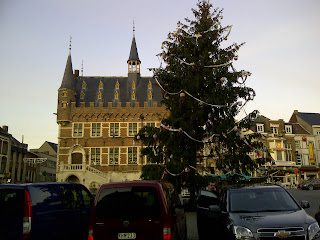 As you get to the top of the Muur, where it kicks up over 20%, where Cancellara rode away from Boonen you get to the little "Chapel" area at the top and there's a nice view from the top (unfortunately it isn't captured well with a tiny camera shot). 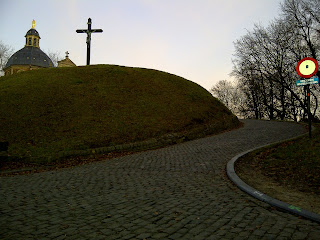 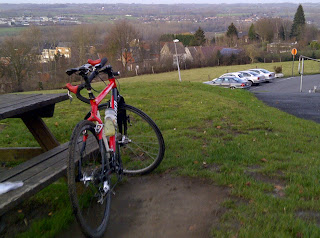 Then as the sun was setting I headed off for some sightseeing in Luxembourg on Sunday. It was a gorgeous day and I set out by bike from the town of Strassen, about 5 km from the big city. If you ever get the chance to visit here I would really recommend it and do it by bike. I ended up putting in 45 km exploring pretty much all of Luxembourg city. Be prepared to do lots of climbing (and descending) as you can go up and down in many places. It's quite the incredible city with the "canyon" running through (with a surprisingly tiny river at the bottom) with the amazing walls/caves and bridges. 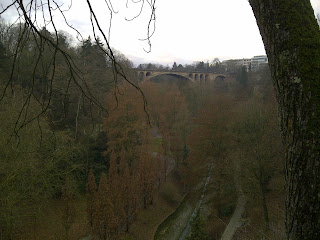 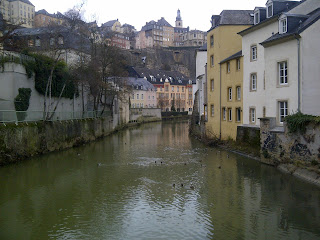 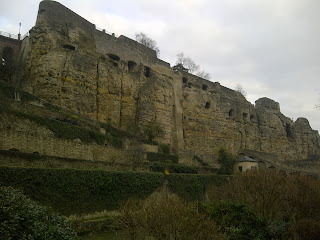 Then after my tour of Luxembourg it was off to do the Liege-Bastogne-Liege circuit, except I only did the Bastogne-Liege exciting parts. In Bastogne there is a monument (again in the middle of a traffic island) along with a commemorative plaque with the details of the course and each year's winner. This Classic is called "La Doyenne" because it's the eldest sister of the 5 main classics. It was an incredible ride and the guy who wins this classic is truly incredible. There are 7 or so classified climbs but in between the main climbs it is really rolling and hilly. 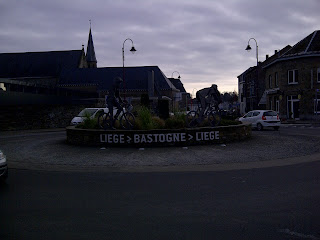 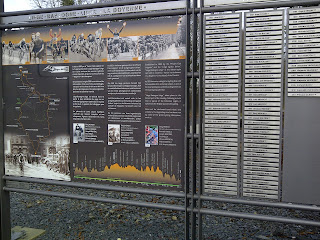 The countryside was truly gorgeous and I just couldn't capture by camera the beauty of the hills and villages (such as Houffalize, Stavelot, Spa) on a great day for riding (about 3C with hardly any wind). The climbs were short and steep like the Cote de Stockeu (Stele Eddy Merckx) at 1.2 km avg 12 % or long and gradual like the Col du Rasier (4.5 km at about 5 %). I took a few "road" shots here and, of course, with Philippe Gilbert winning this past year there had to be something for him. Also, lots of forest here and there was actually a cross-country ski place near the top and what looked like some great hiking trails (there was a tiny bit of snow on the ground at the top). 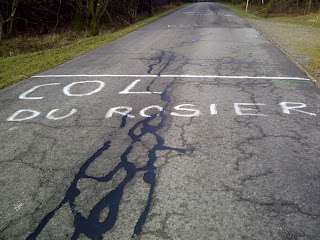 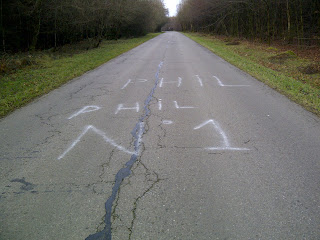 As the sun was setting on the day, I had time to reflect on the awesome stay here. I thought my trip to Spain in September couldn't be beat but this one has had as many or more superlatives. I will miss you Belgium! 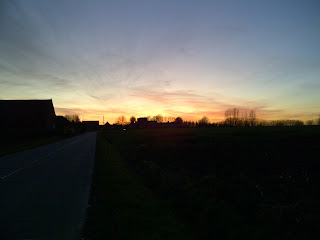 Kingston ride on Friday anyone?
Posted by Dr. Funk's Belgian Cyclocross Experience at 14:30