It was a busy weekend racing. Saturday's race was in a place called Lottenhulle about 35 km from here. This time I had company for the ride and race. An American guy Chip and his Canadian partner Laura accompanied me as Chip was racing in the Master B race. These two work for the Olympics Committee with Laura stationed in London for the 2012 Summer games and Chip in Sochi, Russia for the 2014 Winter games. The weather was more typical of this time of year with strong winds (37 km/h from the SW) and pissing rain. I got a great start this time and actually could have led out into the field but backed off a bit in 4th. As it seems is the case for a lot of these races, they take place in farmer's fields. This one (and the one on Sunday) was full of cow paddies and manure and the first stretch was tough grinding (and became harder as the race wore on) through the dung and mud. I liked this course because it had a good mix of road, single track and farmer's patches. These courses tend not to be so technical but it's full out racing the whole time. I didn't touch my front brake the whole race and only used the back one at a few spots each lap. Laura took a picture of me with Chip's camera after the race covered in mud but the picture will have to wait until Chip gets back to Sochi and emails it to me. I just took a few shots from the race after me. This weekend the weather turned nice after our race (the opposite of last weekend). 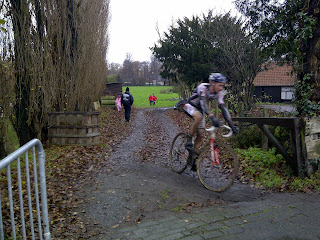 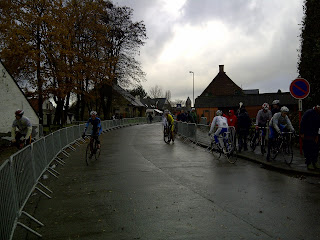 Some of the young riders milling around just past the finish line.

On Sunday the race was only 13 km from here in Tiegem - where else? in a farmer's field. This one also had it's fare share of cow pies and was very sloppy with mud. There was one tricky rolling section just after we sprinted off the road section one dismount with a jump over a ditch, otherwise all in the farmer's field, which was mainly mud and grass. After the race I don't know if I've ever seen as much mud and grass caked on my bike. Once again the pictures will have to wait until Chip emails them to me. I'm really surprised my gears didn't jam during the race because they were doing it like crazy afterwards. I continue to move up the standings from 13th in the first, to 10th, and 6th and 5th, Saturday and Sunday, respectively. The top three guys are just too good and they are quite a ways off the front. As in all the races I've done here in Belgium, I've come out on top in terms of $$. For some reason the guy today thought I paid twice so he gave me back 21 Euro after the race and I only paid 8 to get my number and 5 to get into the farmer's area.
For a cool down later in the day, I did part of the Tour of Flanders route going up the Koppenberg one last time (this time with road tires), the Steenbekdries, the Taaienberg and a couple of others that I can't remember the names of right now. This was probably not the best idea. My legs are tired! 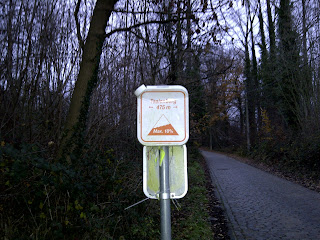