The Climbs of Gent-Wevelgem

Got up early this morning and drove the Chain Stay van about 70 km to do the hill climbs of the Gent-Wevelgem Spring Classic race before heading into work. This is known as the sprinter's classic since the hills are far enough away from the long flat finishing roads into Wevelgem that the sprinters can often regain contact with the aid of their team mates. The climbs are really nothing much except for the famous Kemmelberg on the cobbles. There's the Baneberg, Rode berg, Scherpenberg, Monteberg and a few other "bergs" and these are repeated twice in a loop of about 15 km. It was a cool crisp and beautiful day for the ride as I started out in a small town called Reningelst. 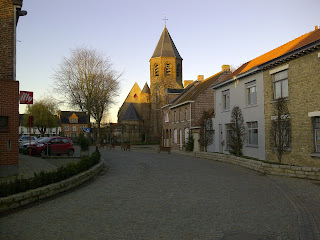 The sun was shining over the hillside as I took this picture as I came down the Rode berg. It was kind of funny since they had a little chairlift that went between a couple of the hills right over the road (didn't take a picture of that). 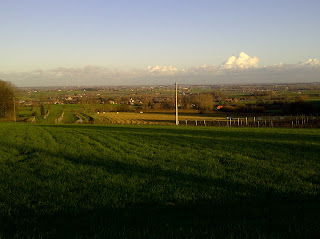 The Kemmelberg has a lot of history behind it with many soldiers slaughtered here in World War I. There were a lot of monuments and cemeteries in this area. The climb starts out very easy at about 4 % by the sign and sure doesn't look like much. 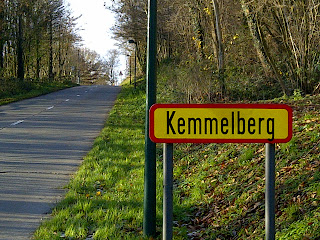 However, when you make the right hand turn up here (by the next picture) then it starts to kick up to 8 % then over 20 % as you get closer to the top. 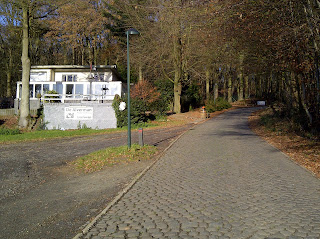 I picked up the pace to try racing the climb (after this picture) to the top. It definitely was tough. There's a hostel and place that looks like a castle on the top in a beautiful forested area. For the descent, I took the steep cobbled direct route (20 %). Apparently, this descent was removed in 2007 after too many crashes and now the racers go down an easier asphalt descent back to where it is less steep.
Then it was off to work. For those of you who don't believe I actually work on my sabbatical I snapped a picture of the Institute where I've camped out for the past few weeks with the large steel DNA helix monument in front - not the prettiest of buildings, especially since they are doing some additions but it's got some nice features inside. I'll probably post one more time from the CX race on the weekend and the last remaining rides on the roads of the famous Belgian classics before the big return to K-Town.
Posted by Dr. Funk's Belgian Cyclocross Experience at 12:07