Climbs of the Tour of Flanders

It took a long time to get into the research institute today. Turns out there was a quickly-called bus driver strike that I (along with many of my fellow passengers) didn't know about. The trains ran smoothly but it ended up being a long walk from the train station to work then back again after work. I've been slowly trying to get through most of the 17 or so climbs of the Tour of Flanders. Each year the courses of these classics races (including Paris-Roubaix) change a bit so the climbs are not always the same. I've done about 7 now with the Eikenberg, Steenberg, Leberg done today. Not all of the climbs are cobbles. 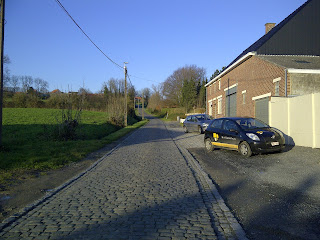 The view from the bottom of the cobbled Eikenberg (these felt smooth after doing Paris-Roubaix). 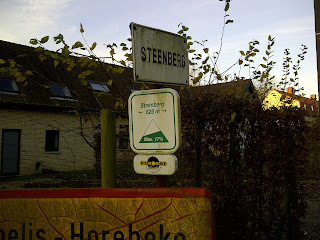 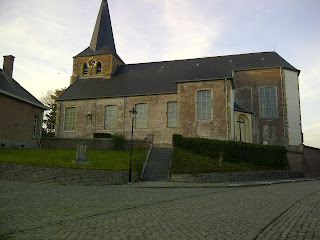 Just before getting to the Leeberg there's this big church.
On the way back to the Chain Stay I came across this
church I hadn't seen before, which looked neat as the
sun was setting. 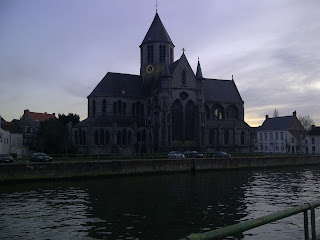 Riding along the canals it's neat to see the long barges going up and down. I think these guys must live on the barges and call them home. You often see them with their car, small boat and dog so when they anchor up they must take off into the city wherever they find themselves. 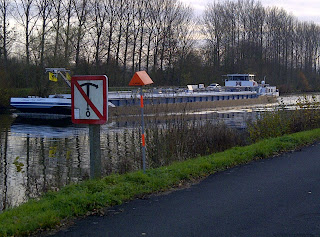 Back along the main highway I took a picture this time showing the bike lane and how far it's separated from the car traffic. Bikes definitely rule here but I have to say that just 50 or so km away when I was in northern France there was a huge difference in driver habits toward bike riders. In several places between the cobbled sections guys would pull right out in front of me or honk, stuff I haven't seen at all here in Belgium. Perhaps it's just this one area because southern France, Pyrenees and Alps didn't seem to have this type of behavior. 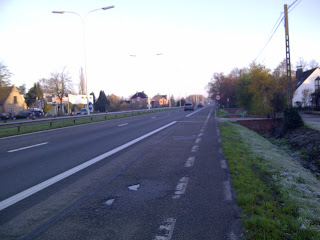 Next up on my ride list are a few more climbs of the Tour of Flanders including the famous Muur-Kapelmuur where Fabulous Fabian rode away from Tom Boonen in 2010 and the 14 climbs of Gent-Wevelgem with two CX races in between.
Posted by Dr. Funk's Belgian Cyclocross Experience at 10:40