Racing in the Carrot Patch!

This morning I headed out to a place called Maria Aalter about 38 km from where I'm staying for my 2nd CX race in Belgium. It was warm (about 10 degrees C) but windy (steady at 35 km/h). I had a hard time finding this place from the Google Maps directions because I found myself in the middle of a farmer's field - but that's where the race was to take place! I already feel pretty comfortable driving here and finding my way around and figuring out how to sign up, etc. It's pretty easy when you get the hang of it. I didn't arrive so early this time but I still had a full hour to ride a few laps. About two-thirds of the race was in the farmer's field and he must have been growing carrots since there were bits and pieces of carrots everywhere on the course. The ground was hard packed in this field and was extremely rutted. I don't think I've ever had a shaking so bad in a race or training session (for the Kingston guys it makes the Fort Henry trails seem very smooth). There were two mud sections in the field along with a few ditches. After we finally got out of this field, we went into a school area with a playground section where all the technical and fun stuff was situated including a 3-stair dismount and then up and down a 4 meter hill 3x with 2 sandpits and 2 ditches interspersed between, then around a couple of soccer fields. There were lots of switchbacks throughout the whole course.
There were 20 guys in the Master C race and about the same number in Master B. Same format as last week with the B guys starting about 30 sec in front of us. I got a much better start this time and was in 5th place as we made the first swing onto the farmers field from the road (starts are almost always on a road here with at least a 100 m straight away). However, a few minutes later on the ditch dismount before the mud section I remounted too soon and got bogged down in the mud and was passed by about 7 or 8 guys - bad mistake! Anyway, I had a few mishaps that cost time on the 5 laps but got into a good group with two others. On the last lap, I got stuck in the sand pit when one of the two in our group misjudged his line so I ended up going down then lost contact with these two and finished 10th. Not sure if I would have taken 8th but it was definitely in reach. I was much more competitive this time and closer to the leaders so I'm hoping I'll be in the top 5 by the time I leave here. I recognized the faces of just about everyone so it seems like the same crew shows up at each of the races and I beat at least three of them from last week that beat me. I won 5 Euro again and on top of getting the 5 Euro for returning my number I again finished ahead by 2 Euro. I could get used to this racing for free or picking up a few $$ each race!
I was planning to take some pictures after my race when the juniors were riding next but the weather turned very nasty with rain and even more winds. So, I snapped one shot on the soccer fields and that's all I have to show. 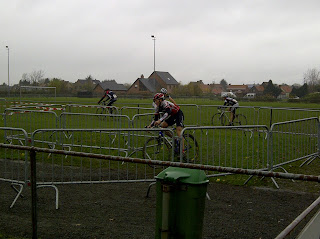 Next weekend I'm going to try doubling up in Lottenhulle on Saturday and Tiegem on Sunday. We'll see how that goes. I'm also planning on a mid-week ride of the last half of Paris-Roubaix with all the cobbled sections from the Arenberg forest into the velodrome at Roubaix. This will depend on a few things working out including weather, being able to take my bike on the train and some good maps! Roubaix is about 40 km from where I'm living. It could mean a very long day 130+ km with not a lot of day light so I hope I can work out the logistics. If not this coming week I may still be able to try the following week but daylight is working against me.
Posted by Dr. Funk's Belgian Cyclocross Experience at 06:21