Made it to Belgium after a Long Two Day Trip BUT No Bike!

My whirlwind trip to Orlando FL for the American Heart Association Meeting started on Friday then back to Toronto on Monday morning then continuing to Montreal then to Frankfurt (with 6 hour layover) and finally to Brussels - with almost no sleep this has left me kind of wasted. My luggage bag arrived but no cyclocross bike surfaced. The one positive thing about the bike not showing up was that I could ride the train unimpeded since I was arriving right during the end of the work day and the train was jammed from Brussels Central to Oudenaarde. I was met by my host at the Chain Stay Gregg Germer and the first thing he said is "they called from the airport and your bike arrived to Brussels and it will be delivered sometime tomorrow". I was hoping to assemble the bike tonight since I haven't ridden for 5 days now and I'm going crazy!
Right now there are two other guests at the Chain Stay - Craig Richey - arrived one week ago right after Nationals. Craig is a rising CX star. He was recovering from pneumonia at Nationals and didn't fare so well but the week before he won a race in the Verge series in New Jersey. The other is Gabby Day from the UK who is looking to be a strong rider on the Women's World Cup scene. Two young Brits will be arriving on the weekend. 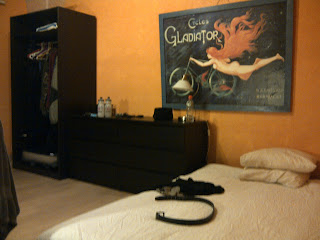 Cycling Dreams above my bed at the Chain Stay!

Let's hope my bike arrives tomorrow so I can get out for some training - race 1 in Zelzate 50 km from here on Saturday!
Posted by Dr. Funk's Belgian Cyclocross Experience at 13:07