What a weekend experiencing Belgian CX racing live (as in competing in my first race and watching a UCI race instead of in the local Eastern Ontario Series or on a computer screen)! Today was the Super Prestige Gavere race, one of the highlights on the elite circuit, under fantastic conditions. The women's race started at 10:45, followed by the juniors at noon, the U23 at 1:15 then the elite men at 3 pm. The intensity builds as the day goes on with thousands showing up in a carnival atmosphere with beer and braatwurst de rigueur. The spectators were enjoying the day more than usual, it seems, with sunny skies and a temperature about 10 degrees C, although it felt more than that in the sun. There are big screen TVs at strategic points so you can follow the race at all points while taking advantage of the live view. There were a few horrific crashes on the super fast, hilly course (no barriers), mainly in the earlier races. Here are a few shots from the junior, U23 and elite races. It was amazing to see how fast the racing was today! 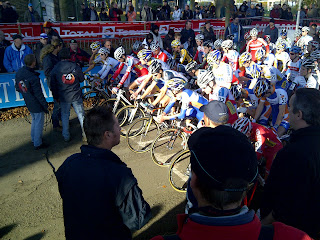 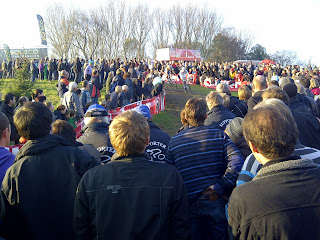 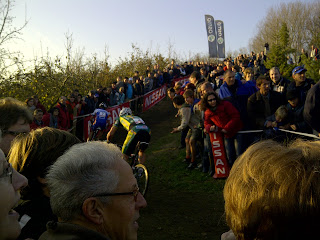 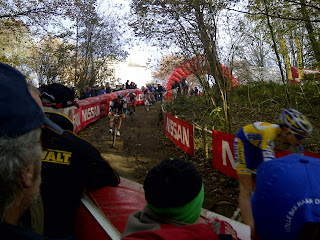 You have to get here early to find a parking spot. I rode my bike here along the canal (more about that later) since it was only 15 km from where I'm living. The team cars and vans show up early. The guys and gals here are super equipped with multiple bikes and sets of wheels. Some of the guys staying at my place have 8 sets of wheels and 3 bikes - beautiful carbon bikes and amazing wheel sets. I got a free pass to get in because Gregg (host of the Chain Stay) sponsors Craig and Gabby. A normal entry fee is 15 Euro. I had a mechanic pass to work the pits but was relieved of my duties because 3 others were here, so I just hung out as a spectator. Most guys weren't using the pits today anyway except the U23 guys that raced with reckless abandon. I saw at least 4 guys running with their destroyed bikes or rolled tires. Check out a couple of the team vehicles here. 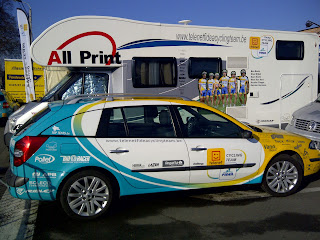 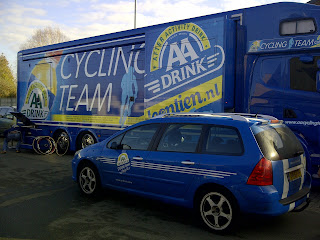 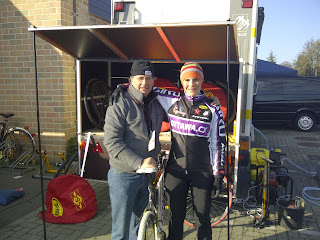 After the women's race, I talked with Vicki Thomas from Ottawa. She has her own blog and updates it regularly (http://ottawa.cx/). Here's a shot of her after a warm down on the trainer, along with her mechanic with the custom-built bike and wheel "workshop" in the back of the RV they use to travel to races. I wish I had a guy like that to take care of my lonely one bike and one wheel set! I feel woefully under equipped after seeing what every one has here.

On Saturday I hopped in the Chain Stay van and took off to my first race in a town called Zelzate north of here just on the Dutch border. It was very foggy when I set out so a little bit unsettling for my first time driving in Belgium. I was warned to get to the races here early especially the first one since I might need a Belgian racing card. I was a good 2 hours early arriving at 9 for the 11 am start. This was a B level race for amateurs and it covered all the categories Master A, B, C (exactly the same as in Ontario), juniors, U23 and "elite" (amateur level). These courses are apparently much less technical and tend to be easier than the Super Prestige, GVA and World Cup courses and this one definitely fit that bill. There was one hill in the middle of the race that was used twice along with a small stair climb and a double barrier with a lot of flat straight sections and sandy clay and a bit of grass. Master B guys started a minute ahead of Master C with 21 in our race. I was called up last being a "newbie" here with no points in the category finishing 13th. This was a "feeling out" race to see how things are done here at the start, figuring out number of laps, etc. It's definitely a handicap not being able to understand Flemish. When returning my number I was surprised to know that I had won some prize money (apparently it goes 15 deep). It costs 8 Euro to get in to race and then you automatically get 5 Euro when you return your vinyl number. Taking into account my winnings I came out ahead by 2 Euro! Talk about inexpensive compared to road racing and the Southern Ontario CX series!! Next weekend will definitely be raced much more aggressively now that I understand the racing scene here and maybe I can win 10 Euro next time! I hope to get in some decent training after missing 5 days in Florida and traveling over here. I wish I had some pictures to post but I haven't figured out how to find them. I know there was at least a few photographers out on course but I don't know if they post them like at some of our races back home.
I'll end this by showing you a few pictures at sunset on my ride home with Craig Richey after the Elite men's race. You can ride for endless miles along the canals and there are very few hills in the northern part of Flanders (unlike the southern Flemish Ardennes region). This coming Saturday is the big World Cup race in Koksijde. It's going to be a big event. I'm racing Sunday in a place called Maria Aalter. More later! 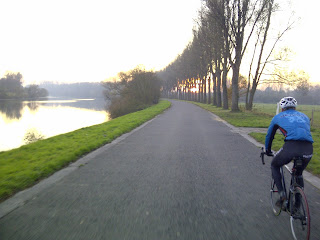 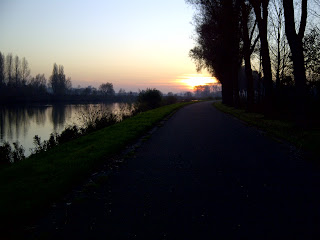 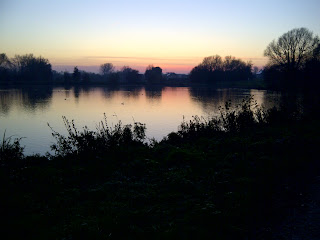